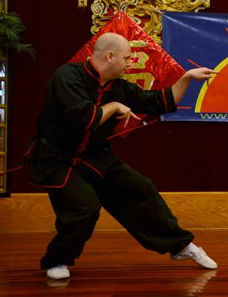 Under Paul’s guidance, Andrew has been introduced to (and continues to develop): the northern styles of Praying Mantis, Long Fist and Monkey; the southern style of Six Harmonies Taizuquan; and various traditional weapons.

Andrew continuously seeks to deepen and expand his understanding of martial arts.  To that end he became a student of Chen style taijiquan under Ren Guangyi; a student and instructor of Amerindo Pencak Silat under Jim Ingram; and a student of Taikyoku Araki-ryu under Ellis Amdur.

All of these teachers and styles have contributed to Andrew’s understanding of martial arts, as is represented here on this site.